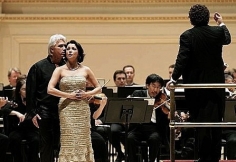 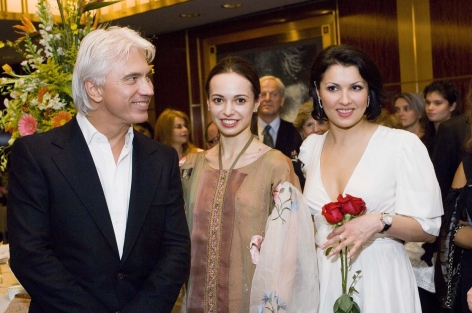 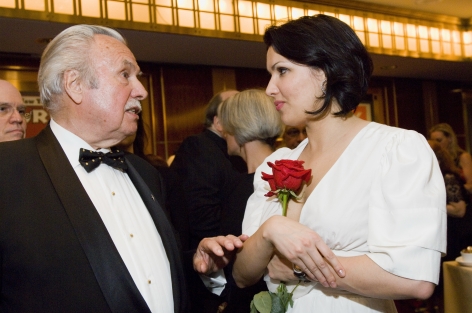 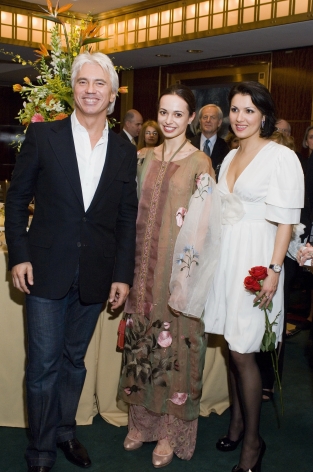 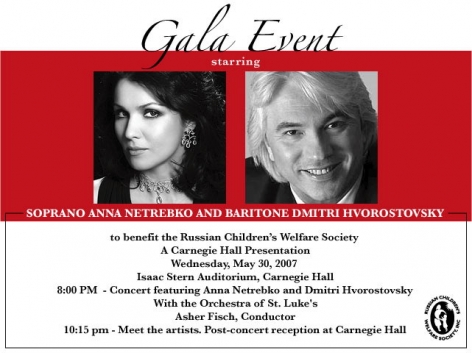 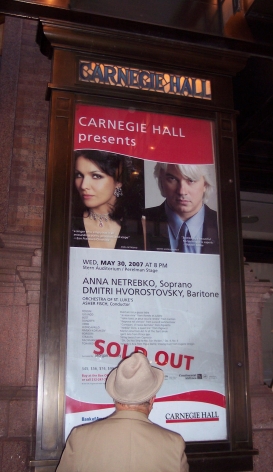 The Russian Children's Welfare Society for the first time in its history hosted a fundraiser at a concert presented by Carnegie Hall on May 30, 2007. The concert featured two of the leading opera singers in the world, Anna Netrebko, Soprano, making her Carnegie Hall debut, and Dmitri Hvorostovsky, Baritone, accompanied by the Orchestra of St. Luke's. Both Anna and Dmitri are Honorary Directors of RCWS. The sold out evening was a complete success. The Society sponsored a group of retirees from the Tolstoy Foundation and also gave out tickets to vocal students from the Juilliard, Mannes and Curtis music schools. Afterwards, the RCWS held a private post-concert reception with the artists in attendance. After all expenses, the charity earned $100,000.

It was a performance that will go down in recent history as one of the great evenings of this revered concert hall. The event was sold out weeks in advance and immediately before the performance people were desperately trying to purchase tickets. The atmosphere was electric. A guest wrote: "There was a party (and also a concert) at Carnegie Hall last night, and we were there. What a party it was! The audience was chock full of handsome young men and women, many conversing in Russian. It was like a dream from the past. The chemistry between the two stars was something to see. Two incredibly attractive and supremely gifted Russian mastersingers at the top of their game, they each played shamelessly to the excited audience. In my 40+ years of concert going, I've never seen anything like it. Here's Anna Netrebko in a fetching black gown, singing the most difficult opera arias to perfection, even, and this is the hardest possible thing to do, creating characters in a concert venue. And there's incredibly handsome Dmitri Hvorostovsky doing the same thing. When they sang their three duets together, the chemistry was smoking."

Of the performance, one critic wrote: "Ms. Netrebko served notice from her very first roulade in Je veux vivre that she was in complete command and that her stunning instrument can shake the very walls of Carnegie Hall. As often happens at the opera house, the talk at intermission centered around the disbelief of first time hearers of her live performance." Of Mr. Hvorostovsky he wrote: ". he was his mighty self, dazzling with extraordinary breath control and long lyrical lines." He concluded by stating: "All this was great fun but just a prelude to a wonderful encore program. Having her chance to vamp, Ms. Netrebko blew the lid off of any remaining Carnegie Hall reserve with a sassy Meine Lippen sie kuessen so heiss of Franz Lehar in which she not only captivated the audience - and, it seemed, some individual members - but even conducted the orchestra for a while. [Anna blew a kiss to the President of the RCWS.] Mr. Hvorostovsky countered with his signature realization of Ochi chornyje ("Dark Eyes"), a surefire hit. The pair ended with La ci darem la mano, a welcome sendoff for the soprano who will be performing in Don Giovanni at Covent Garden soon. What can I say? Some nights you just want your guilty pleasures."

It was a fabulous evening and the post-concert reception went on to 1 AM at the Rohatyn Room at Carnegie Hall. The Society thanks Chopard for its support and supplying beautiful gift bags. Anna is an official brand ambassador of this Geneva based company. We also thank the professional staff of Carnegie Hall for working so seamlessly with us. In addition, the Society expresses its gratitude to Art Saguirian, President of BMC Imports Ltd, Oxford Capital Management, Igor Gorbaletov, James Wolfensohn and Board members: Peter Tcherepnine, Tom McPartland, Michael Jordan and Doug Paul. One guest summed up the extraordinary evening by writing to us: "Thank you so much again for the wonderful event - it was unlike anything I've ever heard or seen - fantastic!!"

View The New York Times coverage of the Benefit Gala, 2007