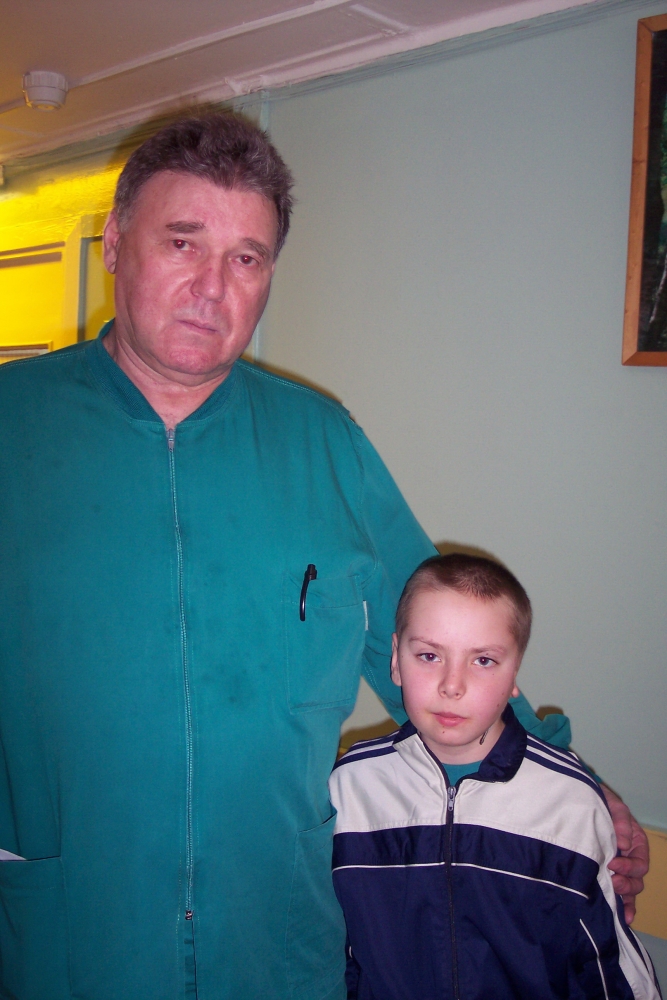 Prof. Vitaly Roginsky with a little patient at the Moscow Medical Center for Maxillofacial Surgery

“GIVE BEAUTY BACK TO THE CHILDREN” - PEDIATRIC MAXILLOFACIAL SURGERY FUND

Thousands of Russian children are burdened by unsightly facial deformities as a result of congenital defects, tumors, cleft lips, cleft palates, and other traumas. Only 2-3 hospitals in all of Russia have specialized surgeons to undertake cases that often require a series of surgeries and highly advanced medical technology. Consequently, treatment is often a luxury, few families have access to even when it is a dire necessity for a child’s physical and psychological well-being.

The Russian Children’s Welfare Society has been involved in several medical assistance projects helping to properly equip hospitals, promote training of Russian doctors in the latest medical advancements, and treat children in need.

In 2010, RCWS launched “Give Beauty Back to the Children,” in partnership with Professor Vitaly Roginsky, Head of the Moscow Center for Maxillofacial Surgery (MCMS) and Lev Ambinder, Head of the Russian Aid Foundation (Rusfond). MCMS is one of the most innovative facilities in Russia providing treatment and rehabilitation for children with facial deformities.

Thanks to the join efforts of Rusfond, MCMS and RCWS, the “Give Beauty Back to the Children” program has forever altered the lives of over 2,000 children suffering from facial deformities. The average cost per surgery is in the range of $2,500-$5,000. Thanks to our donors’ support and the help of advanced medical micro technology, Professor Roginsky and his staff have witnessed the transformation of as a result of these surgeries.

We would like to share few stories of little patients whose lives have been changed thanks to this project.

Damir’s parents, a young couple could not be happier when the ultrasound showed that they were expecting twins. Unfortunately, the following screening showed that the boy had many health issues. After he was born and discharged from the NICU, Damir and his parents went to numerous hospitals in their native Izhevsk, but the only doctors ready to undertake such a complicated case were to be found in Moscow.  Oct 11, 2011 when Damir was only 1 year old two teams of neurosurgeons, maxillofacial surgeons and anesthesiologists operated on the little boy for 20 hours.

In 2015 Damir reunited with those surgeons on stage when they were presented Best Doctors Award for performing 4 simultaneous surgeries to remove craniocerebral hernia and facial deformities.

Damir’s name means “Gift to the World” and his story is a reminder that modern medicine, human kindness and aid can create miracles.

Lena’s mother writes: “We welcomed Lena to our family from the correctional orphanage where I work. She could not talk at all. We went through 2 surgeries in 4 years since we became one family. Lena’s previous harsh diagnosis - Intellectual Disability has been waived; now Lena is ahead of her peers at school, she plays violin and draws!  Thanks to 2 courses of speech therapy covered by our donors have completely changed our girl – she mastered sounds and is communicating more freely. Lena’s therapy is ongoing.

April 1st 2009 our family welcomed our second daughter – Lena Krymykhina who was 3 years old at a time.  Lena’s biological mother gave her up while still at the maternity ward. One of the reasons she sited Lena’s medical diagnosis: Congenital bilateral cleft lip and palate.

Lena could no talk, was avoiding adults and other children, and was diagnosed with Intellectual Disability. At the time Lena entered the orphanage where I happened to work as a speech therapist, she required extensive treatment; could barely talk and was able to eat only soft food and very slowly.

Once I shared our story with a local doctor we knew; he suggested to contact Moscow Center for Maxillofacial Surgery. Suddenly everything changed! First, Lena had an appointment with the orthodontists who created her treatment plan. Next was reconstructive pyloroplasty surgery. It was after this surgery when Lena, looking in the mirror, believed that she does not look different from other children.  Several speech therapy courses followed; Lena started speaking much better and began her studies at regular school (rather than special needs), which was a great achievement for our girl. Lena went through a transformation from a distant loner to a beautiful bright girl, our pride. In addition to a regular school, Lena also attends musical school and plays violin.

Lena is a good student; she received a Governor’s award for her academic achievements; doing very well in her violin classes. However, Lena still has health issues and needs help – she still requires orthodontist treatments and speech therapy.” 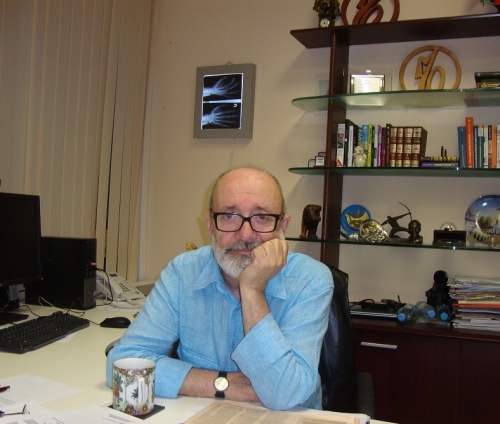 In 2017, RusFond and RusFond USA worked  with the RCWS to provide specialized training in the treatment of  Epidermolysis Bullosa for eight Russian medical professionals at the Birmingham Children’s Hospital in England, one of only two centers to run a specialist pediatric service for this disease. EB is a very rare genetic connective tissue disorder that affects 1 child out of every 50,000. Children with EB are known as “butterfly” children because their skin is as fragile as the wings of a butterfly and tears at the slightest scratch. When provided with proper medical treatment, children with EB can live from 50-70 years versus only 12-15 years without treatment. Regular pediatricians cannot provide the routine care and follow-up that children with EB require so this exchange will arm the Russian doctors with the required knowledge and give them the opportunity to live happy, productive lives free of restrictions.

Besides seriously affecting internal organs and bodily systems, EB has a long list of secondary complications that requires interventions from medical specialists in addition to daily care. The visiting team was shown videos of children with EB undergoing procedures in Birmingham, including surgery and the exquisite care and expertise required to insert feeding tubes without rupturing the children’s skin. They also learned how to properly dress EB patients’ wounds, spoke to youngsters afflicted with the condition, and visited the burn, dental and eye departments. Armed with the specialized knowledge from their training in England, these 8 medical professionals want to set up a specialist clinic to treat EB at St Petersburg Children’s Hospital No 1.

In 2018, RCWS provided assistance to the Russian Children’s Clinical Hospital (RCCH) via equipment and enhanced medical technologies. RCWS sponsored a new surgical drill (the Acculan 3Ti and supplies totaling $12,708) that was highly needed to treat epilepsy and other medical conditions for over 150 children annually from different regions of Russia.

One of the fund's areas of activity is program "House of Hope" which supports patients of RCCH and their families. "House of Hope" is the first and only free home-hotel for ill children and their families where they can live after the little patients are discharged from the hospital but require outpatient treatment. "House of Hope" is vital for many seriously ill children. Currently the facility requires replacement of the heating system and is closed. In 2019, RCWS awarded $11,994 toward funds needed to cover the costs of the heating system replacement.

CHILDREN’S HOSPITAL OF THE CITY OF MOSCOW NO.12

The Children’s Hospital of Moscow provides medical assistance to over 41,000 children (29 schools, 56 kindergartens, 2 orphanages and 3 colleges) who live in their district. The hospital offers both prophylactic care and targeted treatments. The Hospital services almost 75% of children living in southern Moscow. The RCWS helped the Hospital acquire equipment for the treatment and preventative care of children with congenital cardiac defects. This equipment elevated the quality of diagnosis by allowing for more accurate cardiac, transcranial, abdominal, and vascular ultrasounds. Since the average lifespan of a transducer is 10 years, the Hospital will be able to examine around 85,000 children and greatly improve the lives of those found to have cardiac pathologies.

Additionally, RCWS sponsored a hematology analyzer, Pentra MS 60, which tests and quickly provides a full hematological status of a little patient across 26 parameters and requires a significantly smaller volume of blood (almost twice as little) in comparison to other machines, making the experience of blood drawing much less traumatic for children. In spring 2017, RCWS awarded additional funds to replenish most needed supplies for Pentra MS 60 that the Children’s Hospital could continue offering accurate diagnoses, treatment and preventative care to their patients, ranging from newborn to 18 y.o.

DONATE NOW AND HELP A CHILD

Thank You Letter from Moscow Medical Center for Maxillofacial Surgery