RCWS delivered Christmas presents to 2,500 children during the COVID-19 winter

Despite the pandemic canceling the RCWS Annual Yelka celebration, in December 2020 the RCWS team delivered Christmas gifts to 2,500 children from over 20 organizations (orphanages, hospitals, rehabilitation centers, schools) in Pskov, Yaroslavl, Kislovodsk, Ryazan, Kostroma, Novomoskovsk, Moscow & Moscow region. For most of these children it is the only present they have received throughout the year. We thank our supporters for helping us to bring the holidays cheer to children in need.

On October 22, 2020, our partners at the Pskov Children’s Fund hosted a meeting for the RCWS new scholarship recipients in Pskov. This year’s student’s reunion meeting took place at the local café “Chocolate”. Daria Yakovleva, Advisor to Governor of Russia’s Pskov region spoke about the importance of education, shared her career advice, and described the benefits of volunteer work. During the meeting the students introduced themselves, learned about the RCWS and scholarship project, received the RCWS certificates and their stipends, warmly thanking the Society and our donors. In 2020-2021 academic year 50 scholarship recipients from Pskov will receive a monthly stipend from RCWS.

To learn more about the RCWS Scholarship program, visit 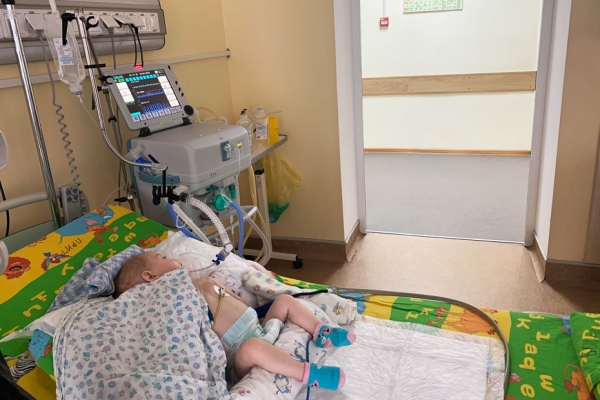 After devastating Moscow, the coronavirus is now spreading across Russia's 11 time zones that include some of the country's most remote regions where underfunded hospitals are even less able to manage the crisis. This has put the health workers at an increased risk. According to the available statistics, due to the lack of protective equipment Russian medics are 16 times more likely to die from the coronavirus than healthcare professionals in countries with similarly high COVID-19 cases. It is also important to stress that over 7% of coronavirus cases in Russia are children.

In response to the epidemic, RCWS joined the efforts of Rusfond (Russian Aid Foundation) and established the COVID-19 Russia Relief Fund to help save young patients, protect medics treating infected patients and to equip hospitals with critically needed protective gear.

Rusfond continues to receive requests from local hospitals in desperate need of help and collaborates with reliable factories to insure prompt delivery of protective equipment to the hospitals.

The Regional Children's Hospital in Yekaterinburg was established in 1957. In 2010, the Perinatal Center was launched, delivering an average of 5,000 babies annually. Today the Children's Hospital in Yekaterinburg is a large multidisciplinary complex, with a capacity of 727 beds. Annually over 18,000 children and 6,500 women are treated at this hospital, over 3,500 surgical inpatient procedures are performed, and 130,000 children receive consultations. Over 5,000 children with bronchopulmonary diseases are observed and treated at the hospital each year. Thanks to our efforts, the hospital received the requested Airvo2 system delivering oxygen and respiratory support to patients, totaling $5,724.

The Tolyatti Children's Hospital No. 1 was founded in 1988. Currently, it is a multidisciplinary medical facility with 308 beds, treating up to 10,000 children annually. The hospital has 12 departments, including Pulmonology and an ICU. To help stop the spread of COVID-19, the hospital requested five healthcare facility air re-circulation UV irradiators to disinfect the air, as well as 630 29-oz skin antiseptic units with dispensers, totaling $5,623. The requested equipment was delivered and installed at the hospital.

The Regional Pediatric Infection Diseases Hospital in Saratov was established in 1946. The hospital provides diagnostics and treatment of children with acute respiratory and airborne infections, among others. The hospital needed re-usable FFP3 respirator masks to prevent the spread of COVID-19 and protect their health workers. The 530 FFP3 masks (totaling $5,608) were sponsored by the RCWS and delivered to the hospital.

To support the COVID-19 Russia Relief Fund or the RCWS on-going projects, please visit the Donate page on our web site.

Thank you for your support!

The 55th Annual Petroushka Ball took place on February 7th 2020 at the legendary Plaza Hotel and featured a stunning performance by mezzo-soprano Serena Malfi and tenor Ben Bliss, who appeared by kind permission of the Metropolitan Opera.

The evening entertainment program included a dance by Denys Drozdyuk and Antonina Skobina. In addition the Barynya Balalaika Orchestra and the Folk Dance Club “Kaleidoscope” energized the guests with Russian folk music and dance.

2019 Yelka Celebration for over 1,000 children at the theater

RTVI Network coverage of the RCWS 20th Yelka in Moscow

We are happy to announce that this fall the RCWS awarded 52 new college scholarships to orphans and disadvantaged children. With 31 students graduating in 2019, the total number of RCWS scholarship recipients has reached 173. 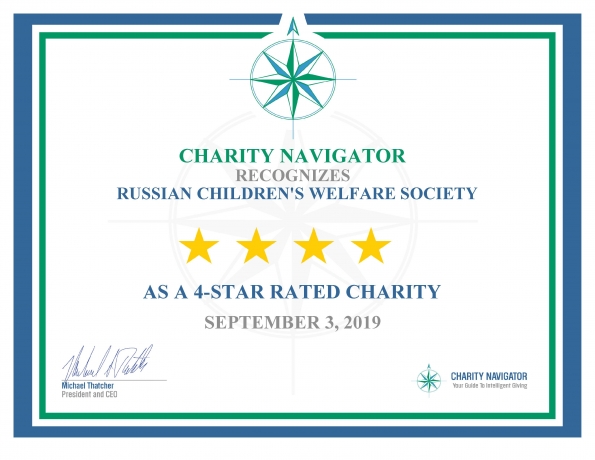 The 54th Petroushka Ball, covered by "Time Out Weekly" on NTV America, hosted by Oleg Frish

The 54th Annual Petroushka Ball took place on February 8th 2019 at the legendary Plaza Hotel and featured a stunning performance by Nadine Sierra, soprano and Francesco Demuro, tenor, who appeared by kind permission of the Metropolitan Opera.

2018 Yelka Celebration for over 1,000 children at the theater

2018 Yelka Celebrations at the Hospitals

It has been 19 years since RCWS organized our first Yelka, a modest Russian Christmas and New Year Party in Moscow for disadvantaged children. Today, over 1,000 children annually participate in RCWS’s Yelka festivities and are treated to a Christmas show and presents. This past December, over 1,000 children traveled great distances to participate in the 19th annual Yelka event at the Cathedral of Christ the Savior’s concert hall in Moscow, to see the holiday show “Master of Winter Forest,” and to receive a gift.

Last December, RCWS personnel and volunteers, together with “Ded Moroz” (Russian Santa Claus), visited the Orphanage in Shatura, which houses 150 children with special needs, as well as over 100 little patients at the Moscow Center for Maxillofacial Surgery and the Institute of Rheumatology in Moscow to distribute gifts and bring some magic to their holiday.

A 2018 Reunion for the RCWS Scholarship Recipients

RCWS has made it a tradition to gather our scholarship recipients for a reunion every summer. This year’s Pskov students reunion took place on July 12th in Pleskov, a retreat overlooking the Pskov Lake, and was covered by a local newspaper.

This year, Michael Narinsky, representing the young supporters and the Russian MBA Club in NYC, joined the meeting online and conducted a workshop for the students. In addition to the diploma ceremony, students had a chance to engage in sport activities: swimming, playing beach volleyball, biking. After lunch, the participants shared their college experiences and thanked sponsors – RCWS supporters.

During the 2017-2018 academic year, 40 RCWS scholarship recipients were attending colleges and universities in Pskov region. As of today, 46 students from Pskov region completed their studies, received diplomas and found employment.

Since the inception of the RCWS scholarship program 15 years ago, the number of participants has grown from 3 in the 2003-2004 academic year to 153 students in 2017-2018 in the Pskov, Yaroslavl and Moscow regions. This help is much needed since only 4% of orphans graduating from high schools in Russia are accepted to colleges.  These children often lack the financial support, guidance, motivation, and self assurance needed to pursue the college education in order to improve their prospects in life.

We are proud that foundations from Austria, Holland, and Norway used the RCWS model of the scholarship program and started to assist other orphans in Pskov region, who are eager to continue their education and receive a college diploma & profession, expanding the total number of students.

Press release by the Pskov Children's Fund about the 2018 Reunion 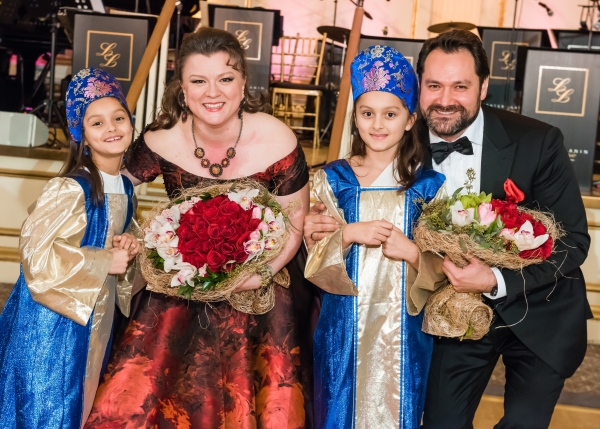 The 53rd Annual Petroushka Ball took place on February 9th 2018 at the legendary Plaza Hotel and featured an exclusive performance by Ildar Abdrazakov, bass and Lyubov Petrova, soprano, who appeared by kind permission of the Metropolitan Opera.

ANASTASIA The Musical on Broadway featured Stephanie Rothenberg. Over 700 guests attended the Ball this year.

The Petroushka Ball is the primary fundraising event for the Russian Children’s Welfare Society (RCWS).  Since its inception in 1965, the Petroushka Ball has been one of the most vibrant and important Russian-American events in New York. The Ball is a strictly black tie soiree attended by over 700 guests representing business, artistic and diplomatic spheres. Past Petroushka Ball events have featured leading soloists of the Metropolitan Opera, the American Ballet Theatre, New York City Ballet, Bolshoi Theater, and other prominent companies.

One of the Petroushka Ball unique features is two distinguished orchestras – The Lester Lanin Orchestra in the Grand Ballroom coupled with the Barynya Balalaika Orchestra in the Terrace Room playing a boisterous set of popular Russian gypsy music, Cossack songs, and lively balalaika arrangements to the early hours of the morning.

All net proceeds from the 53rd Petroushka Ball will be directed towards RCWS's charitable programs.
Follow up on Instagram @PetroushkaBall

This past December, over 1,100 children traveled great distances to participate in the 18th annual Yelka (Christmas Tree) celebration at the Teatrium on Serpukhovka in Moscow and see the holiday show “Sword of Samurai” and to receive a gift.

RCWS Collaboration with the Spivakov Foundation